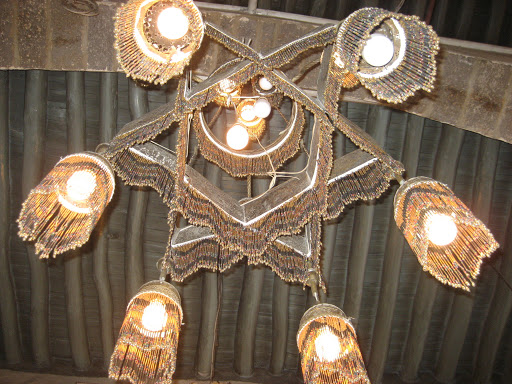 Chandelier formerly inside the Eliyahu HaNabi Synagogue at Damascus

International media services have been covering the saga of the Eliyahu Hanavi (“Elijah the Prophet”) Synagogue in the Damascus neighborhood of Jobar. Last month, video footage released by rebels showed damage to the site, although only in sections outside the main sanctuary. Then came reports this week that the synagogue has been completely looted and destroyed (though no photos have yet emerged). This ancient synagogue — which is referenced in the Babylonian Talmud — marks the spot where the Prophet Eliyahu supposedly anointed Elisha (as memorialized in the synagogue by a marble slab with Hebrew, Arabic, and French inscriptions). Ironically, the destruction of the synagogue appears to have happened during Passover, the holiday where Elijah is welcomed into every Jewish home.

As the photos in Diarna’s collection attest, the beautiful and intimate sanctuary had fine carpets, chandeliers, an elevated central bimah (prayer platform), and even a posted admonishment, in Arabic, asking people to be quiet during prayers and respect the sanctuary. That plaque has apparently now been looted or incinerated. Photos also reveal that the synagogue is located right next to an UNRWA education center for Palestinian refugees. In addition to the beautiful photo collection, we have mapped the precise location of the synagogue, in a suburb outside downtown Damascus. Seeing the site’s physical setting is a reminder that it once served as a kind of “destination synagogue” for the Jews of Damascus. Normally only one Jewish family, the synagogue’s caretakers, lived in Jobar. They would be joined on Shabbat, festivals, and summer nights by an influx of pilgrims — escaping the bustle of the city for a relaxing setting filled with jasmine.

SUMMARY: First mentioned in the Babylonian Talmud, the synagogue named after the Prophet Elijah is located in a Damascus suburb and served as a pilgrimage spot for the city’s Jewish community. The sanctuary marks the spot where Elijah supposedly anointed Elisha. The synagogue made international headlines in early 2013 when video footage released by rebels revealed that the synagogue’s outer courtyard and rooms had been damaged by mortars. Then came news that the site had been looted and destroyed —ironically during the holiday of Passover, when Jews around the world symbolically welcome Elijah into their homes for the seder.

ORIGINS: One of the site’s oldest references is to a dispute —between the visiting 4th century Rabbi Rafram bar Papa and the congregation— recorded in the Babylonian Talmud. “‘Bless ye the Lord,’” he pronounced, to which the congregation “cried out: ‘Bless ye the Lord who is to be blessed,’” in reproof of the hapless rabbi’s offending formulation.

ELIJAH: A marble headstone in the main sanctuary features inscriptions in Hebrew, Arabic, and French declaring the location where Elijah anointed his successor in prophecy, Elisha. Elijah is said to have found refuge from King Ahab’s persecution and received sustenance from ravens in the cave, atop which the synagogue was later built (possibly by Elisha). Another legend holds that it was Elisha who hid in the cave and therein foretold the ascension of Aramaean King Hazael. Hazael’s anointment purportedly later took place on a stone bearing the faint imprint of steps, which may have been visible about the middle of the synagogue’s right wall.

STRUCTURE: Israel Joseph Benjamin (“Benjamin II”), visiting the site in the mid-19th century, wrote that the “very ancient” original structure had been destroyed by Titus. A rebuilt synagogue, the work of 1st century rabbinic figure Eleazar ben ‘Arak, also came to ruin, this time at the hands of a 16th century Jewish apostate. The site’s sanctity was otherwise “respected by every conqueror” —even those who “laid waste [to] the whole country have not touched this building, which is of an extraordinary solidity; and the Jews, who sought refuge there, were never exposed to attacks.”

GROTTO: The interior is described as consisting of 13 supporting pillars “6 on the right and 7 on the left side, and is everywhere inlaid with marble. There is only one portal by which to enter. Under the holy shrine, where the Pentateuch was preserved, was a grotto, wherein several persons could stand upright; the descent to which was by a flight of about 20 steps.”

ATTACHED APARTMENTS: Benjamin II’s mention of the preserved Pentateuch is presumably a variant of the story, as told here by the 18th century Anglican traveler Richard Pococke, that “In three apartments of the synagogue there are thirty six copies of the law, excellently well written on parchment rolls, each of them having a round wooden case to put them in… [and which were] preserved here when Titus destroyed the temple” at Jerusalem. The synagogue’s resemblance to a Greek church did not elude Pococke, who records that it may have been one, although the time period is not given.

PILGRIMAGE: For Syria’s Jewish community, the site’s multiple legends combined to render it a place of special devotion, particularly on the Sabbath, festivals, and summer nights, when Jobar’s lone Jewish family, the synagogue’s caretakers, were joined by an influx of pilgrims. Sick persons seeking a one-night cure within the grotto were regulars throughout the year. In addition to the Biblical prophets, pilgrims seeking miraculous recoveries were drawn to the site by the promise of intercession on their behalf by 16th century Rabbi Samuel Elbaz, progenitor of the Abuhasera family of Moroccan mystics.

RETREAT SPOT: Reverend William Graham, writing in the 1840s, details how Damascene Jews would decamp to the synagogue at Jobar, “a pleasant evening excursion for those whom the love of health, or pleasure, or iniquity, lured from the burning atmosphere of the city.” A cheerier, although still dutifully reproachful, take on this “favourite resort of wealthy Jews, male and female,” comes from the Rev. J.L. Porter. Writing about twenty years after his colleague in the cloth, Porter observed how Jewish pilgrims treated the area as “their park and their café” where “they spend their long summer afternoons, often the entire night under the bowers of vine and jasmine. Not unfrequently the groves resound with mirth, and revelry, and song. Strange mode this in which to celebrate the memory and honour the shrines of Israel’s great prophets!”