A short walk from Imam Khomieni Square in the center of Hamadan, Iran, is a pilgrimage site venerated by many Iranians as the burial shrine of biblical luminaries Esther and Mordechai. These heroes of the holiday of Purim—who, according to tradition, saved the Jews of the Persian Empire from genocide—are memorialized at this remarkable site. Renovated in the early 1970s by the renowned Iranian-born architect Yassi E. Gabbay, the shrine was defaced after the Iranian Revolution and has since fallen into disrepair. More recently, it has been threatened with destruction. 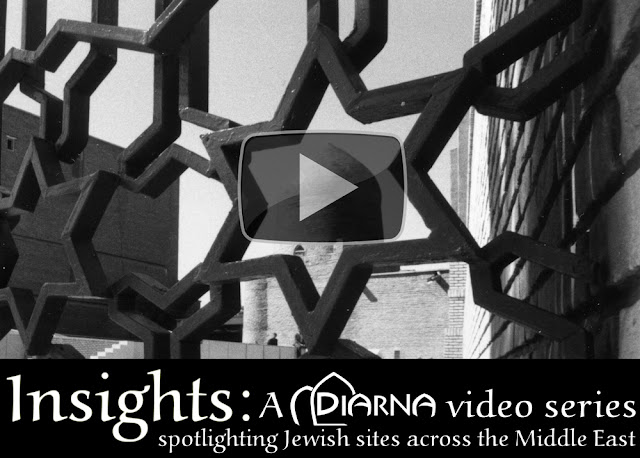 Diarna published “Inside Queen Esther’s Tomb,” the inaugural installment of Insights: a Diarna video series generously supported by the Elizabeth and Oliver Stanton Foundation to spotlight Jewish sites (synagogues, cemeteries, schools, shrines, and other structures) across the Middle East. The video tour features rare, if not exclusive, documentation, including 19th century Christian pilgrim illustrations, photos from the turn of the 20th century, post-renovation photos smuggled out of Iran, Diarna’s 3-D site reconstruction that puts the shrine “on the map” in Google Earth for a global audience, and an interview with the architect. A version of the video in Persian is available here. Just in time for this Purim, Diarna presents a new video—part of the UCLA Fowler Museum’s “Light and Shadows: The Story of Iranian Jews” exhibit—featuring elements of “Inside Queen Esther’s Tomb” blended with a new and expanded interview. We are grateful to Yassi and Saam Gabbay (his son and the video’s creator) for their dedication to virtually preserving the site, and their great efforts to ensure the video was ready on time. To learn more about the shrine’s history read “Esther’s Tomb: Iran’s Jewish queen defies decay and dissolution”