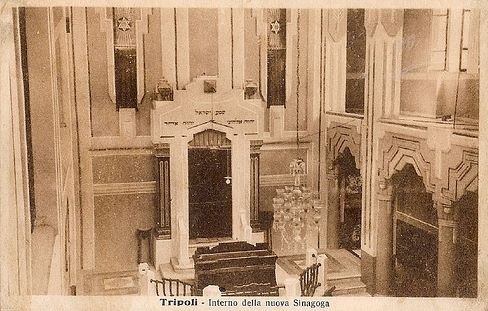 With Libya’s Jewish community officially extinct and war engulfing the country, an intrepid correspondent demonstrated that simply visiting what remains is difficult but possible. As recounted in this Associated Press report, which lists Diarna as a source, the only way to enter the synagogue until recently was “by sneaking through a hole smashed in a back wall, climbing over dusty trash and crossing a stairwell strewn with abandoned shoes to a space occupied by cooing pigeons.”

Once inside, above “an empty ark where Torah scrolls were once kept” and looking down upon a floor “strewn with decades of garbage,” is the barely discernable Hebrew text of the Shema Yisrael prayer. The formerly Jewish neighborhood around the synagogue has fared no better. The next door mikveh (ritual bath) building and Ben Yehuda Jewish youth club were confiscated by Col. Muammar Gaddafi, along with all Jewish property, early in his regime’s reign.

Jewish life in Libya dates back thousands of years. In modern memory, Jews constituted a quarter of Libya’s capital city, prior to the Nazi’s deportation of several thousands to North African labor camps and concentration camps in Austria and Germany, as well as the 1945 three-day pogromA pogrom is a violent riot aimed at massacre or persecution of an ethnic or religious group, particularly one aimed at J... in which over 130 Jews were killed and much Jewish property was destroyed by arson.