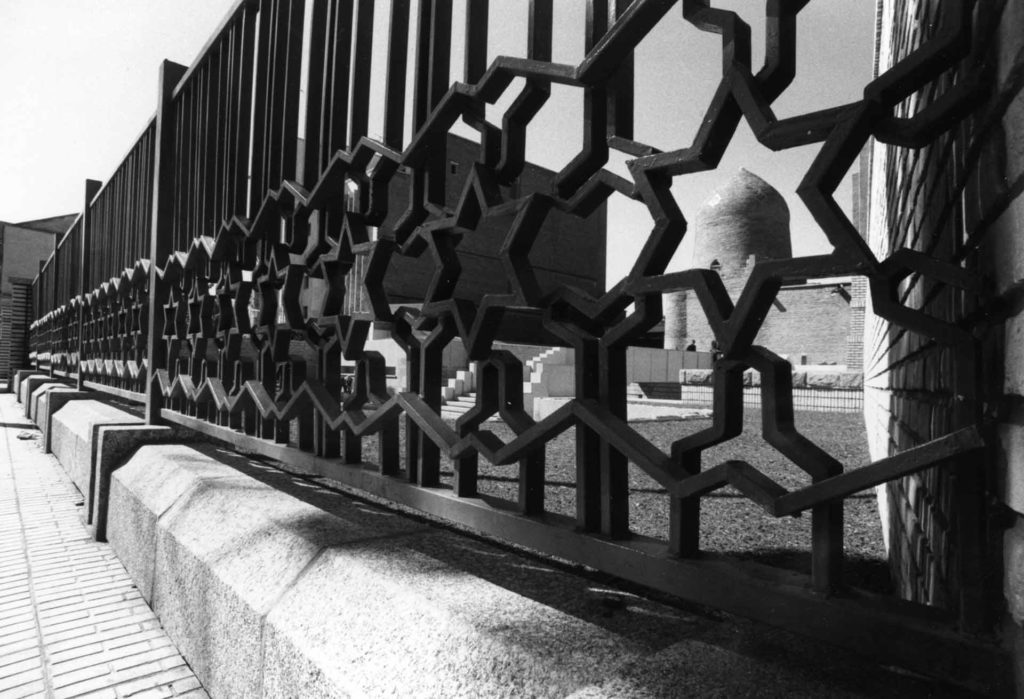 In the poet Mowlana Shahin-i Shirazi’s re-telling of the Book of Esther as an Iranian epic, Hegai, a Zoroastrian priest, approaches the lovelorn shah Ardashir and “like a lion” revealed to him the secret of Esther – whose peerless existence had not previously been known to the royal court. Another secret, however, that of Esther’s Jewish identity, endured for sometime thereafter. As in the story, Diarna has discovered through research on Iran’s historic Jewish sites that secrecy, indeed a double secret, shrouds the Hamadan shrine to Esther and Mordechai.

Rare images and photos, including an exclusive cache from the 1970s

Knowledge of the shrine is limited outside of the Iranian-Jewish community. Those who do know about the site’s existence are mostly unaware of how Yassi Gabbay, the architect of its renovation in the early 1970s, rooted his design in Persian and Islamic architecture. For instance, the site’s once iconic fence with a “Jewish” or “six-point star, combined of two triangles” motif was an homage to an Isfahani mosque ceramic. A recent Tablet Magazine article highlights Diarna’s efforts to make this site and its fascinating history digitally accessible:

There is quite possibly only one Star of David on Earth visible from space…. Location: Hamadan, Iran…. The problem is that the shrine that houses the prominent star has fallen into disrepair at the hands of the local government, and last year anti-Jewish mobs rallied at the shrine, calling for its demolition. In the absence of a Jewish community capable of defending it, a U.S. organization called Diarna (Judeo-Arabic for “Our Homes”) has decided the only option is to restore the site—virtually.

The digital site reconstruction can be toured here. For additional information, consult Diarna’s own article, “Esther’s Tomb: Iran’s Jewish queen defies decay and dissolution,” and watch the interview with Yassi below. We also have a curriculum supplement ready for use with younger audiences.

In the following statement, Yassi expands upon his rationale for the renovation’s design and shares his thoughts about working with Diarna to digitally preserve the site:

The original shrine of Esther and Mordechai in Hamadan, carried the traditional architectural character of Islamic religious leaders, called ‘emam-zadeh’ (meaning the descendant of the Imam). In Iran, thousands of them could be seen in little towns, villages or roadsides. Before the 1979 revolution in Iran, at the time when the government of the Shah was organizing an unnecessary and exaggerated festival to commemorate ’2500 years of Iranian monarchy’, the Jewish minority of Iran, like every other minority and institution, was obligated to participate in the celebration. The project of expansion of the shrine was selected and I was commissioned as the architect. My main goal in approaching the architectural concept was to express the relationship of the Jews of Iran, as the oldest minority and living in the country for the last 2500 years, with the Iranian nation. During the design process, in order to avoid any obstruction of the shrine, all new spaces including the small synagogue, were designed to be in a semi-basement. Therefore the only exposed portion of the synagogue’s structure was the roof. The beams and the roof, being at the ground level of the shrine, were designed in the shape of the “Star of David” mainly to reach the goal explained above. It is important to mention that the “six-point star”, combined of two triangles, could be seen in many ancient Persian and Islamic arts. On the colorful decorative walls of the Mosques and Islamic shrines, this motif often is beautifully combined with other motifs in amazing colors…. This is sad to say, that the sensitivities have come, when this motif was put on a flag, and became a symbol and got a political color. But in the era when Esther’s expansion project was built, there was no such reactions, and no better place to use the motif for honoring the Iranians and Iran, the country I love, and the Iranian Jews, who have existed since Cyrus the Great, when the Achaemenid Kings ruled the Persian Empire. Some American clients of mine (our firm, Gabbay Architects, is based in Beverly Hills, CA.) did not know anything about the existence of Esther’s shrine, until they saw my interview recorded by Diarna and published on Youtube. I have to express my appreciation for the efforts of Jason Guberman coordinator of the Diarna Project for their researches on this and other similar Jewish historic sites and especially the article they wrote about the shrine’s history that was circulated by email amongst Iranian-Jews. Diarna’s idea of designing 3D models of important sites in Google Earth is priceless. That was why I was very excited to work hard with Diarna’s research and modeling assistant Erin Okabe-Jawdat to build the model of the shrine, based on my memories and some rare photos that I have shared with them. (The original plans, were destroyed back home, prior to my move to the US). So as the scholars have always questioned the authenticity of Esther to the monument, I always question myself about the full accuracy of the finished model !!

Our team is grateful for Yassi’s invaluable assistance, the experience of working with this architect par excellence, as well as for his kind words.